The Circuit Gilles Villeneuve has been the home of the Canadian Grand Prix since 1978. It’s located on Montreal’s Ile Notre Dame, a man-made island in the middle of the St Lawrence River that was built using rock excavated for the Montreal metro.

The track is a semi-permanent circuit. The area around the pits is reserved exclusively for racing, while the rest of the circuit is opened up to road traffic during the summer months. That makes the asphalt very smooth and, as was the case in Monaco last time out, Pirelli will supply their Soft and Supersoft tyre compounds to the teams.

The cars top 300km/h on four occasions around the lap, braking at the end of each straight for a tight corner. That makes car set-up a delicate balance between low downforce for maximum straightline speed, while maintaining enough aerodynamic grip to ensure braking stability.

There is a single DRS zone in the race – located on the long straight before the final chicane. Throw in the addition of KERS Hybrid, however, and dicey, high-speed overtaking should once again be prevalent on Sunday afternoon. 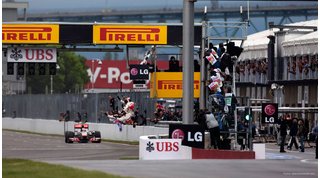 Lewis Hamilton took a sensational victory for Vodafone McLaren Mercedes in 2012. A superbly timed final pitstop allowed him to overtake Sebastian Vettel for the win.

In 1968 Denny Hulme led home Bruce McLaren to give McLaren an historic one-two finish at Mont Tremblant. Hulme inherited the lead when Ferrari driver Chris Amon, who led for 72 of the 90 laps, retired with gearbox failure.

1973 saw Peter Revson’s second and final victory in Formula 1. He qualified second at Mosport in his M23, but dropped to seventh in the early laps. A lucky break with the Safety Car catapulted him into the lead, ahead of Emerson Fittipaldi’s Lotus.

2010 was McLaren’s second one-two in Canada, Lewis Hamilton leading home team-mate Jenson Button. They were separated by 2.2s at the flag, ahead of Fernando Alonso in third place.

In 2011 Jenson won the longest-ever F1 race in 4hrs4mins, after the race was suspended for two hours due to heavy rain. Jenson made 34 on-track passes and eventually sealed victory with a sensational last lap pass on Sebastian Vettel.