Silverstone is inextricably linked with Formula 1: the circuit staged the opening round of the inaugural world championship in 1950 and has been the exclusive home of the British Grand Prix since 1987.

The track is situated on a plateau, on the site of a former World War II bomber station and, despite several facelifts over the years, it still retains much of its original high-speed challenge. It was the scene of F1’s first 160mph qualifying lap [set by Keke Rosebrg in a Williams in 1985], and the middle section of the ‘new’ lap – Copse, Becketts and Stowe – remains one of the fastest and most revered stretches of racetrack anywhere in the world.

The most recent change to the layout came in 2010, when the new Arena Complex added 759 metres to the length. Last year the start-finish straight was moved in between Club and Abbey corners to coincide with the opening of a brand new pit and paddock complex in the infield.

Both Lewis and Jenson have had mixed fortunes at Silverstone. It was the scene of one of Lewis’s greatest victories in 2008, while Jenson has yet to finish on the podium at his home circuit. 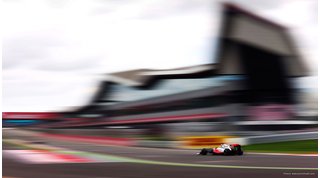 2000 sees McLaren’s first 1-2 at Silverstone, in which David comes home 1.4s ahead of team-mate Mika. DC deserves the plaudits after he pulls off a stunning pass on Rubens Barrichello to take the lead at Stowe.

In 2001 (Silverstone) Schumacher started on pole and led the race early on, but Mika overtook him for the lead on lap 5. By lap 21 he led by a gap of 26 seconds, which subsequently saw his first victory of the year and penultimate win of his career.

2008 was “By far the best victory I’ve ever had,” said Hamilton afterwards. He started the rain-drenched Silverstone race fourth but finished 1m08s ahead of second placed Heidfeld and laps everyone up to third place. A truly stunning performance.